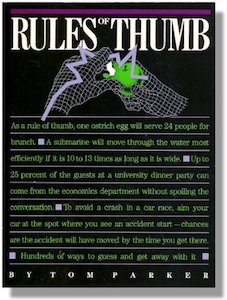 Sarah: Every superhero has an origin story. I’m not sure if every librarian has an origin story — I need to start asking. But I suspect that, when we were kids, we each had at least one reference book we loved. I bet for most it was usually the World Almanac or The Guinness Book of World Records, both of which you could buy through the Scholastic Book Fair. But these were the reference books for me.
Gene: I read The Guinness Book. I never thought “I’m gonna use this to answer questions.”
S: This has nothing to do with answering questions. This is more about the book that gives you the realization that “information is really interesting and I want to sink into it like a bog.”
Rules of Thumb and Rules of Thumb 2 by Tom Parker came out in the 80s. This was pre-Internet. He asked people what they were an expert on that they had a rule of thumb about — a way to approximate something, a way to judge about how something is, from people who know it really, really well. The books are full of information that would never be of any use to me personally. I think there are maybe one or two that I incorporated into my life, but the rest are glimpses into other people’s lives.
G: So they’re generalizable pieces of knowledge?
S: Yes. Here’s one at random: “#180. Crashing an airplane. Three acts of poor judgement equals one airplane accident. Jim Corey, airport administrator.”
G: Oh! So did Parker record other people’s rules of thumb that he read in, like, a newspaper?
S: Some of these are from publications, like he’s got one from The Wall Street Journal on this page, and some are from his interviews with people, or are rules they sent to him. Some of them are really general, they’re not necessarily from experts. “#178. Digesting a Meal. As a rule, it will take forty-eight hours to completely digest a meal. Stephen Flanders, Princeton, New Jersey” He doesn’t seem to have any particular expertise.
G: Nice.
S: This is one that stuck with me, no idea why. “#158. Shooting at Helicopters: North Vietnamese ground troops used their thumbs to determine whether they could reach enemy aircraft with handheld weapons. If an airplane or helicopter was bigger than a thumb held at arm’s length, they would bring it down with ground fire. D. Tanner, Fort Wayne, Indiana”
A lot of this doesn’t apply anymore, because technology and the world has changed. There’s a thing about soda machines that I bet isn’t true now, but I really like this idea that there’s all this information out there that comes from a huge amount of experience that people distilled. I just read and read and read this as a kid.
G: “You can estimate the weight of a northern pike in pounds by cubing its length in inches and dividing by 3500.” What?
S: Yeah, that’s SUPER specific! Here’s one: “Playing it safe: never play poker with anyone called Doc, never eat at a restaurant called Mom’s.”
G: (laughs) “Ten feet of elevation gives four pounds of pressure in a water pump.” “To determine the true value of items lost in a burglary, take the reported value and divide by three.” That one’s from a police chief.
S: (laughs)
G: These are great!
S: Some of these are probably jokes, some are things people use every day.
G: “One pound of soybeans yields two and a half pounds of tofu.” How can that be true?
(a tofu discussion ensues)
G: I think that’s where this falls apart, when you know too much (or just think you do) about whatever the rule is about.
S: This isn’t so much about the interacting with people part of librarianship that I like, it’s the I get to look at books with answers in them part of librarianship that I like. I’m a sucker for information I can’t use.