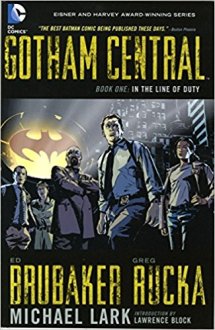 Gene: Brubaker and Rucka are two of the best crime writers working in comics. They’ve both written superhero series as well. Rucka writes novels, too, mostly thrillers — I’m a huge fan. They did this series together back in 2004, and there are 4 or 5 books, about the regular cops in Gotham City (the place where Batman fights crime) having to deal with a world filled with super-powered villains.
What I remember most from the series is the first story. It’s either because it was first or it’s the best or both. Two detectives are investigating a kidnapping, and when they knock on the door, they accidentally find Mr. Freeze, the villain in a cryo-suit who also has freeze weapons. And Freeze freezes one cop solid and just kills him. It’s horrifying. But it shows how terrible this guy would be to normal people, in this world. He doesn’t kill the second cop because he wants him to suffer. Look, here’s the cop who survived. He’s got frostbite on his hands because they were frozen to his gun. And his partner was shattered after he was frozen. (We didn’t see that happen.)
Detectives Allen and Latoya are assigned to the case. And they have to interview the cop and hang out at the morgue. The survivor doesn’t want them to call Batman for help. He wants the cops to solve the case, because if they call Batman, it’s like giving up.
Sarah: I love that kind of story.
G: And then they find another guy murdered, frozen from the inside out.
Schwartzenegger played Mr. Freeze in the third Batman movie, and it was kind of silly instead of scary, very colorful. This is the opposite. The horror of what Freeze can do is laid bare as part of a police procedural.
S: Yeah.
G: The other book I’d compare it to is Bendis and Avon-Oeming’s Powers series, about detectives who investigate crimes committed by those with super-powers in a world where powers are outlawed. (I love this series so much, too.)
S: This seems even better to me.
G: It’s got a darker tone. It’s grittier.
And look, here when the detectives finally do call Batman, he’s just a shadow.
S: This book really looks good to me.
G: I hoped you’d like it because you’ve been reading so many mysteries. I was trying to figure out what books in my permanent collection you’d enjoy. I spent a bit of my weekend trying to convince my nephew, who was visiting from Davis, California, to read this, and I failed. So I’ve been trying to come up with a better pitch for next time he visits.
S: I always like those post-modern looks at superheroes. I really enjoyed The Regional Office Is Under Attack.
G: You want to borrow this?
S: Yeah!
G: Success.