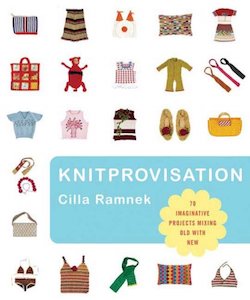 Sarah: I grabbed this book because the projects in it are really cool, and I thought you might like it because it makes use of all of your half-finished knitting and crochet projects. If you get started on something and don’t know how to finish it, or get started and it doesn’t look like you thought it was going to look, or if you buy something from the thrift store and want to know how to use it for something else, this is how you do it.
Gene: (looks at a picture of a project, laughs out loud)
S: This one reminded me of the sound suits made of doilies in the Nick Cave book you love.
G: Is the shirt part of this project? 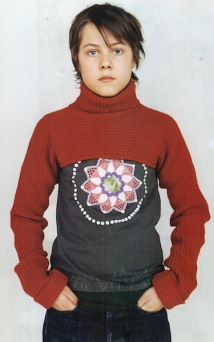 S: This is two projects. A t-shirt with a really fancy multicolored doily sewn to the front of it, with a circle of buttons sewn around it, and then on top of that, the model is wearing a sweater that juuuuust comes to nipple level? It’s sleeves and a neck and just the very top of the body.
G: A long-sleeved half turtleneck sweater. It is very sound suit-ey. I like it.
S: How to take a half-finished thing and make it into something else…
G: Can you make a sweater that’s just from the nipples down, too? A tube-top sweater?
S: Keep reading! (laughs)
G: Oh my god! That looks really unfortunate! 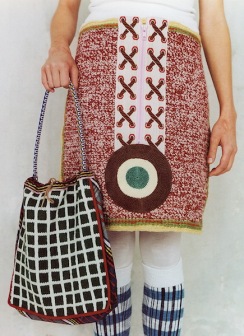 S: It’s a skirt that’s made out of some really plain knitting, maybe a sweater that’s been chopped up, and she’s put on some patterned ribbon and a zipper and a doily and put on some new edging…
G: “Skirt with pot-holder in front” Holy crap. This looks like sweaters I’ve seen in photos from Mongolia, of people packing up a ger.
S: It’s really little pieces made into bigger projects. It’s not overly twee, it’s not cutesy.
G: But there’s kind of an adorableness to this.
S: Yeah!
G: (laughs at another page)
S: There are some garments where people are wearing a t-shirt underneath, and some where they SHOULD be wearing a t-shirt underneath. Stuff that doesn’t totally work as a functional item of clothing.
G: This one is an apron dress worn by a little girl with no shirt on underneath. Paper, plastic and yarn… 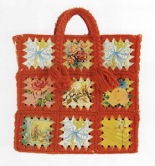 S: This is kind of cool, I think she got this bag used, mostly as-is. It’s greeting cards that have holes punched along the edges and then they were crocheted together into this bag.
G: Did you come from a family that had crocheted beer can clothing?
S: No, but I have made a crocheted library card hat.
G: Ooooh!
S: I bought the beer can pattern and made a library card hat. It’s cool to wear for outreach — people can tell you’re from the library, they recognize their cards on the crown.
G: Some of these things look demonic. 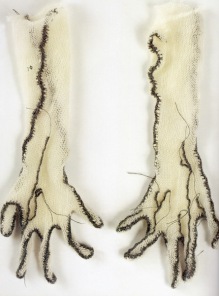 S: They do! Which is kind of why I like it. There’s a pair of gloves in here that are just tremendously disturbing. This one is nice, they took a piece of crochet and made an iron-on from a photocopy of it, then put it onto a sweater.
G: I think we have different definitions of the word “nice.”
S: You can’t duplicate any of these projects exactly, because so much of each is based on stuff that the author found, which I kind of like. There are so many craft books that say “here, copy this perfect, beautiful thing” or more like “fail at copying this perfect beautiful thing and then hate yourself.” This is the opposite of that. It’s just ideas, to get you to think differently about creating and about what you can make from what you have. 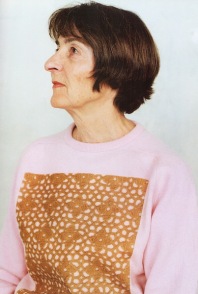 G: I think someone could re-market this as post-apocalyptic craft fashion, maybe turn it into a book about re-knitting the clothing of the dead (or repurposing their handmade potholders, at least).

One thought on “Jazz of the Knitting World”