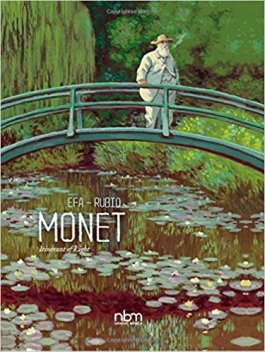 I’m not an art expert and I don’t read many biographies — I’m a guy who races through museums, often giggling with my daughter, to find the few works that catch my attention and make me stare at them. I’ve been caught up by a few of Monet’s huge, bright paintings but know little of him or the Impressionist movement — it’s worth noting that Efa’s art and design pays homage to many of his works — but I was still surprised how much I enjoyed this beautiful graphic novel.

The book opens late in the painter’s life, in 1923, with Monet reluctantly getting much-needed cataract surgery, fearing for his vision, and then reflecting on his life. Art was the only thing that took young Monet out of his grief over his mother’s death, and his first mentor was Boudin, who helped him see nature and taught him to paint it outside. Soon Monet dropped out of school, against his father’s wishes, and moved to Paris. But the school he attended there didn’t help him realize his vision, and through many struggles (financial, emotional, internal) he had to find his way to success and acceptance in the art world. He wasn’t always the nicest guy to his family, but his single-mindedness really made me admire him.

As Rubio notes opposite the last page, this is not a history book — a lot of license was used to develop characters, and the works are not always presented in the order they were created. But it gave me a great sense of the artist and his time.

For librarians and art lovers: At the end are 16 pages of reproduced art works (not all by Monet) and the panels in the book they inspired. (If I were going to read this for the first time, I’d probably start with his section, but only because I’m unfamiliar with so many of the paintings that are referenced. But discovering it at the end of my read had me flipping back through the book and enjoying it again, which was fun, too.)