I finally picked up Uprooted: The Japanese American Experience During World War II by Albert Marrin. This book was a National Book Award finalist and on several best-of lists for 2016. And on page 15, I saw this:

If you have spent any time looking at old newspapers or old medical ads, this looks nothing like an ad from the 1800s. If you pause for even a moment to read the text, you may wonder at a drug ad for something called “Placebo.” If you pause for two moments, you may be struck by how unlikely the phrase “drink it on the go” is for an ad of that time. Perhaps you suspect this this may instead be a joke.

Librarian powers activate! I flipped back to the picture credits to look for a source. The image was listed as PD-US: public domain in the United States, no original source listed. A quick Google search turned the image up on Pinterest, tagged as a Victorian advertisement. I put that image through the TinEye reverse image search engine and hey presto: a link to the original source. It’s a comic from the (awesome) webcomic by Drew Fairweather and Natalie Dee, Married to the Sea, which uses public domain clip art. The image in Uprooted and on Pinterest is trimmed to remove the URL of Married to the Sea, denying them credit as its source.

I really hope this was not the work of the author. I hope this was put into the book some underpaid intern charged with finding no-cost illustrations. But this really really really shouldn’t have made it into the final version of a serious work of history for young readers. This is absolutely going into my classroom presentation on finding reliable sources online. (Why not try the US National Library of Medicine Digital Collection? There you could find this actual public domain ad for a children’s medicine that contained morphine.)

Alanna Mitchell’s brother-in-law was diagnosed with malignant melanoma. His extended family rallied around him and Mitchell, because of her background as a science writer, was put in charge of investigating his treatment options to determine whether they were helpful, did more harm than good, or were pure fantasy. In the process she found that people think about cancer in really odd ways.

People are afraid of cancer in ways that have little to do with the reality of the disease. They think it’s inescapable and happening more and more, but when rates are adjusted for a larger population and longer lifespans the rate of cancer is staying about the same and may even be dropping in the US and other western countries. Cancer is much more treatable than it used to be, and more people are surviving it. The general public thinks cancer is preventable, caused by lifestyle choices, diet, or maybe even one’s mood and outlook on life. Sometimes this idea drives people to try to live healthier lives, but other times it can be cruel: people blame those who get cancer or think that they somehow deserve it. Mitchell found that only a few things clearly cause cancer, like smoking, radiation, asbestos, benzene, and HPV. The majority of cancers are caused by some random cell mutation — we don’t yet understand the how or the why.

Mitchell writes clearly and compassionately about the history of these frightening and contradictory ideas and how they affect the ways we respond to the disease and the people who have it. She looks at it as a metaphor for how we feel about ourselves and our relationship to the natural world. And she explores how the war metaphor (battling cancer, winning against cancer) can be counter-productive.

Then her daughter is diagnosed with a completely treatable cancer and, even though Mitchell had read mountains of research dispelling the myths, she immediately panics and begins blaming herself. She spends the last portion of the book examining the emotional impact of cancer. It can feel safer to blame ourselves than to admit that the process is usually random and completely out of our control.

The Geography of Madness: Penis Thieves, Voodoo Death, and the Search for the Meaning of the World’s Strangest Syndromes By Frank Bures. Melville House, 2016. 9781612193724. 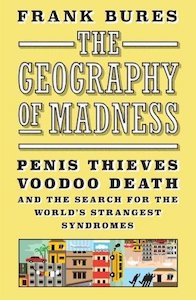 In multiple regions of the world, there is a medical syndrome in which men, and sometimes even large groups of men, go into a panic because they believe their penises are disappearing either by shrinking or being pulled inside their bodies. As traumatic as that would be on its own, in some places it’s understood that if the penis disappears fully, the victim will die. People blamed for causing the disappearance by magical means are assaulted and sometimes killed. When the stories appear in the news, they’re reported as regional oddities or some strange resurgence of primitive beliefs. Bures takes it much more seriously. He went on a multi-continent search to interview people who had suffered this malady and the doctors who had treated them. As he tells the story of his journey, he shares his extensive research into medical problems that are limited to certain cultures or countries.

While the doctors he interviewed about penis theft often blamed the syndrome on lack of education and superstition, Bures found research on similar culturally influenced medical problems for almost every country. High levels of education and a scientific viewpoint didn’t seem to prevent them. There is a heart problem that is only diagnosed in Germany, a liver problem that is only diagnosed in France, and a foot problem that only occurs in England. There are conditions that only occur in some places: anorexia is only diagnosed in cultures that value thinness. Syndromes can spread through cultural contact, like the high rates of lower back pain that spread from West Germany to East Germany after reunification. Others rise and fall over time with no change in their supposed physical cause, like carpal tunnel syndrome. These are cultural syndromes: every society has a culture and every culture has its syndromes.

Bures makes it clear that no one is faking or making it up: people who have these illnesses really do suffer, but the biomechanical model of illness can’t fully explain what is happening and why. Your medical diagnosis shouldn’t change when you cross a border, but it happens: Lynn Payer, an editor and medical correspondent for The New York Times got wildly different advice from her doctors when she moved to France. In her book Medicine and Culture (quoted by Bures on p. 85) she wrote that “all one must do to acquire a disease is to enter a country where that disease is recognized — leaving the country will either cure the malady, or turn it into something else.” Incidence rates of some illnesses increase based on how long an immigrant group has been in their new home: exposure to a new culture becomes a risk factor for disease.

Bures’ research is fascinating (don’t miss the chapter endnotes, they contain astonishing stories as well), and he writes in a sympathetic and engaging voice. He’s investigating the cultural sea each of us exists in and can’t recognize. Culture isn’t just native dress and food, it’s how we understand and experience reality.