In twenty-five chapters Jack Lynch, a Professor of English at Rutgers University, describes fifty seminal reference works throughout the ages. For example, chapter six describes the centuries-long impact of Avicenna’s (ibn Sina’s) million-word, encyclopedic and authoritative The Canon of Medicine then contrasts it with the Anglo-Saxon Bald’s Leechcraft which, in a more practical 32,000 words, gave Roman prescriptions (and included substitutes readily available to Britons).

Lynch knows that reference works are not static, despite presenting some that are literally carved in stone or baked into clay. As of publication Grey’s Anatomy was in its 40th edition, and Lynch says no text nor drawings from the original remain in the current version. That stalwart desk reference for physical science, The CRC Handbook of Chemistry and Physics, is in its 95th edition and going strong, although its author, the Chemical Rubber Corporation, hasn’t sold any rubber or chemicals in decades. (Lynch always tries to encapsulate the publication history of each of the reference works he highlights, right down to the page count and the weight!)

Lynch buffers these chapters with shorter sections in which he discusses trends in the genre, like the transition from scrolls to books. Most amusing is “Ghosts and Montweazels” in which Lynch discusses accidental and deliberate errors. Publishers and compilers commonly err as to the scope and scale of their projects; century-long efforts are not unknown. Some works even have revisions before they’re completed.

Great dictionaries and encyclopedias that defined languages and even nations are covered, but Lynch gives science and technology its due. Chapter 10 discusses those aides to computation and description, Henry Briggs’ Arithmetica Logarithmica and Johannes Kepler’s Tabalae Rudolphinae. “We are left with the strange paradox that mathematical tables were rendered entirely obsolete by the computer, although tables were the main reason computers were invented,” Lynch writes.

There are also reference books that are just plain fun. Lynch briefs us on a select group of games rule books and sports record books. He also writes about a sex manual which was in print for centuries, and a 1761 directory of London sex workers! If you’re wondering how to keep all these references organized, Lynch describes the efforts of the great catalogers to bring order and utility to the world’s libraries. (Yes, library catalogs are reference works.) He also reveals how his own home bookshelf is arranged.

Lynch confesses the printed reference work may be in need of a eulogy. Everything is moving online. If it’s a eulogy he’s written, it’s a great one.

Thanks to Robert in San Diego for this guest review!

Sarah: There was a small bookcase in the dining room when I grew up…
Gene: This is another of those “when Sarah was growing up” books?
S: Uh huh. One of the things my dad would do when my brother and I asked kid questions during mealtimes is he’d say, “Let’s find out!” and grab a book off a shelf. And we’d look up the answer. We had the compact Oxford English Dictionary and this. I’m sure there were other books, but those are the two I remember. That’s a really happy memory for me, approaching questions like that. I hope I can pay that forward.
G: That’s nice.
S: Brewer’s Dictionary of Phrase and Fable is one of those things for when you read a phrase or hear a phrase and need to know what it means and where it’s from. Later in life I learned that some people look down their nose at Brewer’s idea of phrase origins, so maybe it isn’t super-reliable? I have two editions, one is the one I grew up with and the other is more modern, called 20th Century Phrase and Fable. The old one leans more towards classical stuff.
G: So what do you look up in this?
S: Someone says, “That’s like the Sword of Damocles,” and you look it up to find up what it means.
G: (reading) “impending evil or danger”
S: And then it tells you the story of Damocles so you get the meaning and the context. This is good when you’re a kid and don’t know what anything means. (laughs) Because this is not individual words, you can’t get this from a dictionary. There might be an entry based on a word sometimes, though, like here’s a section on “deaf:” deaf as an adder, deaf as a beetle, deaf as a post, deaf as a white cat, none so deaf as those who won’t hear.
G: So they have phrases with the word deaf, and fables.
END_OF_DOCUMENT_TOKEN_TO_BE_REPLACED

Sarah: Every superhero has an origin story. I’m not sure if every librarian has an origin story — I need to start asking. But I suspect that, when we were kids, we each had at least one reference book we loved. I bet for most it was usually the World Almanac or The Guinness Book of World Records, both of which you could buy through the Scholastic Book Fair. But these were the reference books for me.
Gene: I read The Guinness Book. I never thought “I’m gonna use this to answer questions.”
S: This has nothing to do with answering questions. This is more about the book that gives you the realization that “information is really interesting and I want to sink into it like a bog.”
END_OF_DOCUMENT_TOKEN_TO_BE_REPLACED

A Dictionary of the Underworld, British and American, Being the Vocabularies of Crooks, Criminals, Racketeers, Beggars and Tramps, Convicts, The Commercial Underworld, The Drug Traffic, The White Slave Traffic, Spivs by Eric Partridge. Bonanza Books, 1961. 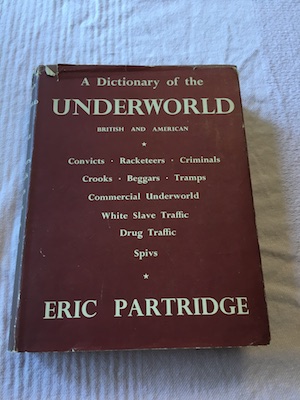 Sarah: My parents are downsizing, so every once in a while they’ll say, “If there’s anything you want, make sure you ask for it.” So I said, “I want A Dictionary of the Underworld.”
G: I’ve got to do the creepy thing. (Sniffs book.) It doesn’t actually smell, but it looks like it would smell.
S: It’s old enough that it should.
G: How old is it?
S: First published in 1949, reprinted with new addenda 1961. END_OF_DOCUMENT_TOKEN_TO_BE_REPLACED